Many students of Bible prophecy agree that the modern state of Israel is THE biggest indicator that we are living in the end times.

No other nation in history has regathered after being scattered across the world for nearly 2000 years. The fact that modern-day Jews even know, or care, of their ancestry and its uniqueness is a miracle in and of itself I think.

Since its reemergence as a sovereign state in 1948, its neighbors have been boo-hooing and pitching a fit over a piece of land that, before the Jews began resettling, was essentially a wasteland. This is a piece of land that makes up a QUARTER OF A PERCENT of what is considered Arab(Persian if talking about Iran)/Muslim land in the middle east and northern Africa.  Take a look: 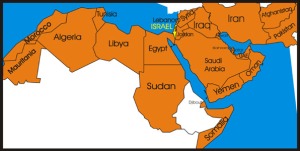 Yet, the PEACE of the whole world depends upon whether Israel gives up a portion of that .25 of a percent. Of course, her enemies will not be happy until the name of Israel is remembered no more and is completely wiped off the map.

The fact that itty bitty yellow slither is the center of world news and the object of world-wide debate and animosity is proof enough that the Bible is True, Replacement Theology is a FALSE DOCTRINE and we are living in the last days of human history as mankind has always known it.

The good, and what will be surprising news for the world, is that yellow slither will be victorious in every assault hurled at her, for Jehovah God defends her and He who put the stars in the sky says she will never again be scattered. Since Abraham, she has and always will be God’s people. Mr. Netanyahu should thumb his nose at Obama and the rest of the world who think they know what is best for Israel and the middle east.

So many Americans couldn’t give a hoot what is happening “over there”, nor do they have any idea as to Obama’s policy concerning Israel, the PA and upcoming peace talks.  As long as gas prices do not skyrocket, who cares? We should care, for God has declared that whomever blesses Israel will be blessed and whomever curses Israel will be cursed. (Genesis 12)

We are living in the end, folks, and we are seeing prophecy foretold thousands of years ago coming true…RIGHT NOW!  Just take another look at the map above…it makes absolutely no sense why one tiny nation could be so hated by the world and much more successful than its envious, evil neighbors UNLESS, the Bible is true. Could anything be more obvious?

Obama to Israel: If you like your security, you can keep it. Period …

Zechariah 12:2-3a, “Behold, I will make Jerusalem a cup of trembling unto all the people round about, when they shall be in the siege both against Judah [and] against Jerusalem. And in that day will I make Jerusalem a burdensome stone for all people: all that burden themselves with it shall be cut in pieces …”

By Dr. Tuvia Brodie, INN – “Once again, Israel’s Left tells us that Israel cannot survive if we refuse to surrender land. They say that Israel and ‘Palestine’ can live ‘side-by-side in peace and security’.

Islamic progress. It’s backwards in more ways than one …