October 2014 – HEALTH – The number of confirmed Ebola cases passed the 10,000 mark over the weekend, despite efforts to curb its spread. And while the disease typically dies on surfaces within hours, research has discovered it can survive for more than seven weeks under certain conditions. During tests, the UK’s Defense Science and Technology Laboratory (DSTL) found that the Zaire strain will live on samples stored on glass at low temperatures for as long as 50 days. This family includes the Zaire ebolavirus (Zebov), which was first identified in 1976 and is the most virulent; Sudan ebolavirus, (Sebov); Tai Forest ebolavirus; Ebola-Reston (Rebov), and Bundibugyo ebolavirus (Bebov) – the most recent species, discovered in 2008. For their 2010 paper, ‘The survival of filoviruses in liquids, on solid substrates and in a dynamic aerosol’, Sophie Smither and her colleagues tested two particular filoviruses on a variety of surfaces. These…

Serve Him in the Waiting

A man beheaded a woman believed to be his mother in her Long Island, N.Y., apartment late Tuesday and then dragged the body and head out onto a street, where onlookers initially thought they were witnessing a macabre Halloween prank, police and witnesses said.The suspected killer, who was not identified, jumped in front of a commuter train near the Farmingdale, N.Y., home moments later, killing himself, Nassau County police said. Police said the woman appeared to be in her 60s, while the killer appeared to be around 30. Police sources told Newsday the victim is believed to have been the killers mother and that the dead man “has a drug problem, apparently.”ADVERTISEMENTADVERTISEMENTWitnesses told the New York Post they saw the man drag the womans body out of the building and onto the street, where he kicked her head some 20 feet before going to a nearby railroad track and jumping…

An area of low pressure over the Arabian Sea has become better organized and is now Tropical Cyclone Nilofar.

A slow drift northwestward is expected through the weekend keeping the cyclone over warm ocean waters and relatively low wind shear.

These conditions will promote further strengthening, and the cyclone will likely reach the equivalent of a strong tropical storm or hurricane by early this week.

There are a couple of scenarios for where the developing cyclone will slam onshore with damaging winds, flooding rain and dangerously rough seas next week. 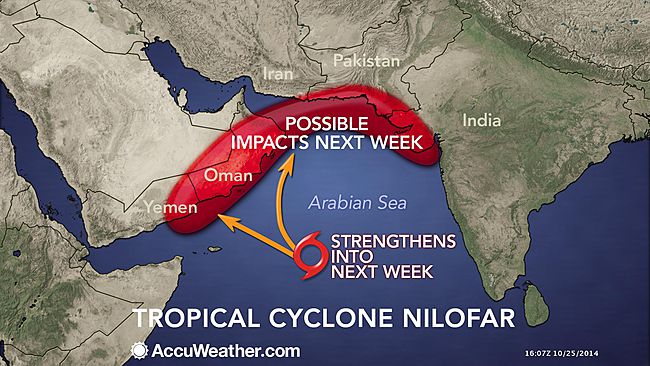 One possibility is that the cyclone would take more of a westward track, causing it to threaten eastern Yemen or Oman by Tuesday into Wednesday. Life-threatening flooding appears to be the greatest concern; however, coastal areas could be battered by damaging winds depending on how strong the cyclone becomes.

After a possible landfall in Oman… October 2014 – JAPAN – Japan warned on Friday that a volcano in southern Japan located roughly 64 km (40 miles) from a nuclear plant was showing signs of increased activity that could possibly lead to a small-scale eruption and warned people to stay away from the summit. The warning comes nearly a month after another volcano, Mt Ontake, erupted suddenly when crowded with hikers, killing 57 people in Japan’s worst volcanic disaster in nearly 90 years. Ioyama, a mountain on the southwestern island of Kyushu, has been shaken by small tremors and other signs of rising volcanic activity recently, including a tremor lasting as long as seven minutes, an official at the Japan Meteorological Agency’s volcano division said. “There is an increase in activity that under certain circumstances could even lead to a small scale eruption, but it is not in danger of an imminent, major eruption,” the official…