In the wee hours of January 13/14th, I had a disturbing dream. I was strolling through a small, picturesque town. A heavy feeling weighed on me, like something wasn’t right. I began to notice people behaving oddly. I came upon this man whose eyes darted about wildly. He himself acted panicked, wild. Somehow I knew a demon had entered him. (I’ve never witnessed this in real life.) I commanded the demon to, in the name of Jesus, COME OUT. It didn’t. Someone (no idea who, I just felt this information passed to me mentally) told me the demon won’t leave if the man doesn’t want it to. (NOTE: I have no experience in real life in “deliverance” ministry. I do recall, however, the story where the disciples couldn’t drive out a certain demon and Jesus told them that kind requires prayer and fasting.) Anyway, I looked around town and noticed others behaving much the same way. Some were resisting the demon(s) and others welcomed it, liking how it made them feel strong. I turned and saw a man (face was blurred) turn a pistol towards his face and pull the trigger. Fortunately I was spared seeing the gory consequence. However, the voice from before told me “The spirit of suicide is strong in America”. End of dream. I awakened wondering, “What was THAT about?”.

The next morning I went to a nearby Mom-n-Pop store and noticed police at the house of a man I know. I went inside the store and asked the owner if she knew what was going on next door. She did. The man shot himself early that morning.

Due to my shock and grief, it was several minutes later before I remembered my dream from just a few hours before.

Within a month and a half, he was the second person I knew to take his own life.

I happened upon this article from a local news station here in KY:

According to the CDC, suicide rates among 12-14 year olds have DOUBLED in the past decade. They also claim that most are NOT the result of bullying, per se. (source is linked above)

As a believer in free-will, I don’t consider “the devil made me do it” a valid argument in most situations. However, something is behind these statistics. I also believe every case is as unique as the people involved. I would never try to lump every suicide into one or two general causes. Still, there may be a few reasons why people are led to believe they are better off dead.

Surely the devaluing of life within our present culture plays a significant role. I mean, if our newborns are expendable….why aren’t I? Or our 10 year olds? Certainly our 45 year olds are unnecessary. You get my point.

Mostly I fear it is the lack of a sense of purpose that lead many to carry out such dark thoughts. Remember how not too long ago teenagers were doing the Tide Pods challenge? Our kids were literally trying to eat laundry soap. Recently there were reports of people attempting the Bird Box challenge, where they try to drive while blindfolded. It seems like every week there is some new fad circulating, each one even more stupid than the last. It’s insanity. And it reflects a society that is bored beyond reason.

Mostly, it reflects a society that has been deceived for so long it no longer recognizes the Truth. Despises it even.

So, yes. There is a spirit of suicide; a movement initiated by devils for the purpose of deceiving and devaluing humankind to the point of death: a physical and spiritual suicide.

Before concluding this post, I want to mention 2 very disturbing stories circulating as late:https://www.wkyt.com/content/news/YouTube-Kids-videos-found-with-suicide-instructions-506386831.html

YouTube Kids is supposed to be a safe sight for youngsters to watch age appropriate videos. Not so, apparently. The above article says there have been reports of someone hacking into kiddy videos with a

9-second clip edited into them of a man giving advice on how to properly slit your wrists.

“Remember kids: sideways for attention, longways for results. End it.”

Then there is Momo. 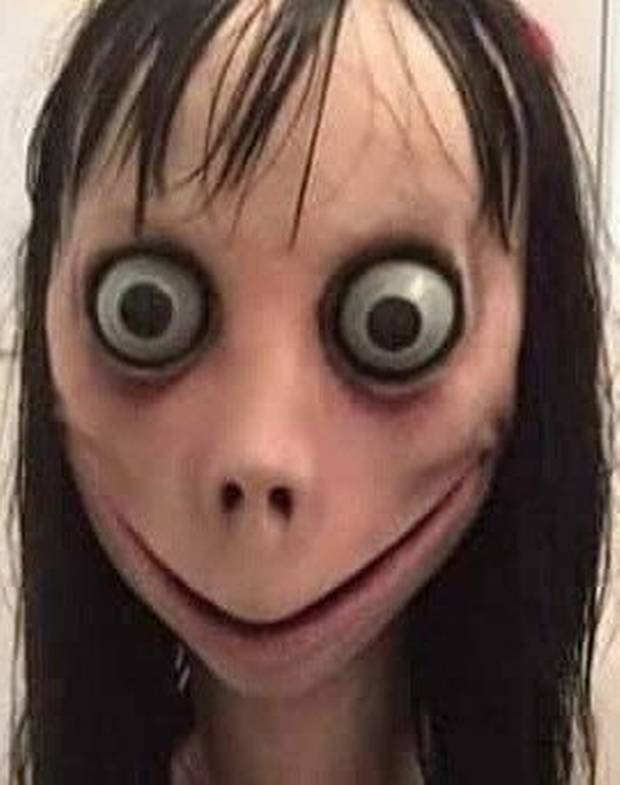 According to various reports, the Momo challenge is supposedly a form of cyberbullying prevalent on platforms such as WhatsApp and YouTube, through which children receive anonymous threatening messages tied to pictures of “Momo,” an unrelated sculpture of a grinning figure with dark hair and bulging eyes…..

The “Momo” messages allegedly compel youngsters to engage in perilous activities such as taking pills, stabbing other people, and even killing themselves.

Whether Snopes says it is an actual threat is irrelevant. Why should I believe what “they” say? I showed the above picture of the sculpture which has been hijacked, and used to depict Momo, 1to my 9 year old son. He immediately shrieked and said, “That’s Momo!”. He assures me he hasn’t seen any videos in which Momo specifically tells kids to harm themselves, but he has come across videos about…”her”… as well as Zozo. (More on him later, maybe).

I was going to share a video in which these young men talk to Momo but YouTube has restricted it and made it un-shareable. Which is a good thing. I could get into something called Tulpas, but that’s a whole other post. Is Momo just another passing fad? Maybe. But the seed has been planted.

And Momo or no Momo, the spirit of suicide is thriving.