I had to share this post by Mr. Duigon. One day there will be a world government, and the earth will not be a pleasant place. And all this climate change nonsense? Yeah, they will shout a big Told ya so! when God pours out His wrath as outlined in the book of Revelation. Even when God makes His presence so obvious, they have a lie lined up. But they will not be able to say or do anything but bow when Jesus Christ, Whom they’ve cursed, plants His feet on the Mt. of Olives, bursts through that sealed Eastern Gate and takes His rightful place upon the throne in Jerusalem.Now, Mr. Duigon’s post: 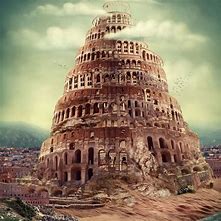 I know I’ve said this before; but in light of President Trump’s speech to the UN earlier this week, it bears saying again.

Our various nations are a blessing to us, a gift of God; and for all the evil that they do, because they consist of fallen, sinful, human beings, they are a protection to us against something so much worse–

In Genesis 11, the earth has but one language, one government; and its rulers propose to build a tower that will reach to heaven, making them the equal of God. Sound familiar? So God confounds their language and divides them into many different nations, and they spread out over the earth. Their differences and their individual characteristics deepen over the years. By and by, they can’t re-unite to do anything together.

Can you even begin to imagine the mischief a global government would get up to, if it actually existed? They still wouldn’t be gods, but they’d come mighty close to being devils.

Read More at the link below:

And in that day His feet will stand on the Mount of Olives, Which faces Jerusalem on the east. And the Mount of Olives shall be split in two, From east to west, Making a very large valley; Half of the mountain shall move toward the north And half of it toward the south. And the Lord shall be King over all the earth. In that day it shall be— “The Lord is one,” And His name one. And this shall be the plague with which the Lord will strike all the people who fought against Jerusalem: Their flesh shall dissolve while they stand on their feet, Their eyes shall dissolve in their sockets, And their tongues shall dissolve in their mouths. It shall come to pass in that day That a great panic from the Lord will be among them. Everyone will seize the hand of his neighbor, And raise his hand against his neighbor’s hand; And it shall come to pass that everyone who is left of all the nations which came against Jerusalem shall go up from year to year to worship the King, the Lord of hosts, and to keep the Feast of Tabernacles.
Zechariah 14:4‭, ‬9‭-‬9‭, ‬12‭-‬13‭, ‬16 NKJV 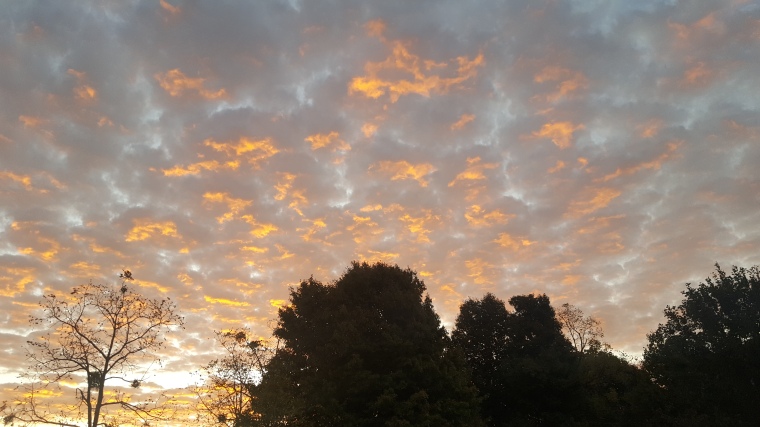 I guess I’ve been doing this a long time……😉😂

I wrote this when I was in 4th grade, so 9 or 10 years old. I cringe at the grammatical errors but copied it exactly as I wrote it back then. Ha ha.

There once was a little boy named Tommy. Tommy wanted a puppy. So on his birthday Tommy got a puppy.

One day Tommy’s mom asked him to go to the market for her. So on the way back Tommy and the puppy were crossing the road. When suddenly a speeding car came rushing down the road and was about to run Tommy over, but the puppy pushed Tommy out of the road. The puppy was run over. For Tommy, so he could not get hurt.

In Service to the Lord. 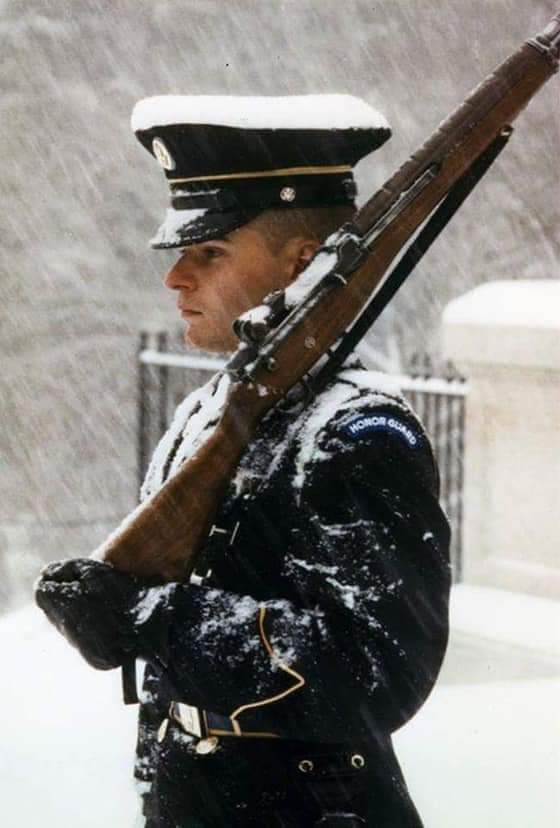 On Jeopardy the other night, the final question was: “How many steps does the guard take during his walk across the Tomb of the Unknown?”

All three missed it.

Tomb of the Unknown Soldier

1. How many steps does the guard take during his
walk across the Tomb of the Unknown and why?

21 steps. It alludes to the twenty-one gun salute, which is the highest honor given any military or foreign dignitary.

2. How long does he wait after his about face to begin his return walk and why?

21 seconds for the same reason as above.

His gloves are moistened to prevent his losing his grip on the rifle.

4. Does he carry his rifle on the same shoulder all the time and if not, why not?

He carries the rifle on the shoulder away from the tomb. After his march across the path, he executes an about face and moves the rifle to the outside shoulder.

5. How often are the guards changed?

Guards are changed every thirty minutes, twenty-four hours a day, 365 days a year.

6. What are the physical traits of the guard limited to?

For a person to apply for guard duty at the tomb, he must be between 5′ 10′ and 6′ 2′ tall and his waist size cannot exceed 30.’ Other requirements of the Guard:

They must commit 2 years of life to guard the tomb, live in a barracks under the tomb, and cannot drink any alcohol on or off duty for the rest of their lives.

They cannot swear in public for the rest of their lives and cannot disgrace the uniform {fighting} or the tomb in any way. After two years, the guard is given a wreath pin that is worn on their lapel signifying they served as guard of the tomb. There are only 400 presently worn.

The guard must obey these rules for the rest of their lives or give up the wreath pin.

The shoes are specially made with very thick soles to keep the heat and cold from their feet. There are metal heel plates that extend to the top of the shoe in order to make the loud click as they come to a halt.

There are no wrinkles, folds or lint on the uniform.
Guards dress for duty in front of a full-length mirror.

The first six months of duty a guard cannot talk to anyone, nor watch TV.
All off duty time is spent studying the 175 notable people laid to rest in Arlington National Cemetery. A guard must memorize who they are and where they are interred.

Among the notables are: President Taft, Joe E. Lewis {the boxer} and Medal of Honor recipient Audie Murphy, {the most decorated soldier of WWII} of Hollywood fame.

Every guard spends five hours a day getting his uniforms ready for guard duty.

ETERNAL REST GRANT THEM O LORD, AND LET PERPETUAL LIGHT SHINE UPON THEM.

In 2003 as Hurricane Isabelle was approaching Washington , DC , our US Senate/House took 2 days off with anticipation of the storm. On the ABC evening news, it was reported that because of the dangers from the hurricane, the military members assigned the duty of guarding the
Tomb of the Unknown Soldier were given permission to suspend the assignment.
They respectfully declined the offer, ‘No way, Sir!’ Soaked to the skin, marching in the pelting rain of a tropical storm, they said that guarding the Tomb was not just an assignment, it was the highest honor that can
be afforded to a serviceperson.
The tomb has been patrolled continuously, 24/7, since 1930.

God Bless and Keep Them

I don’t usually suggest that many emails be forwarded, but I’d be very proud if this one reached as many people as possible.
We can be very proud of our young men and women in the service no matter where they serve.
Duty – Honor – Country
IN GOD WE TRUST — with Herbert F Wieland. 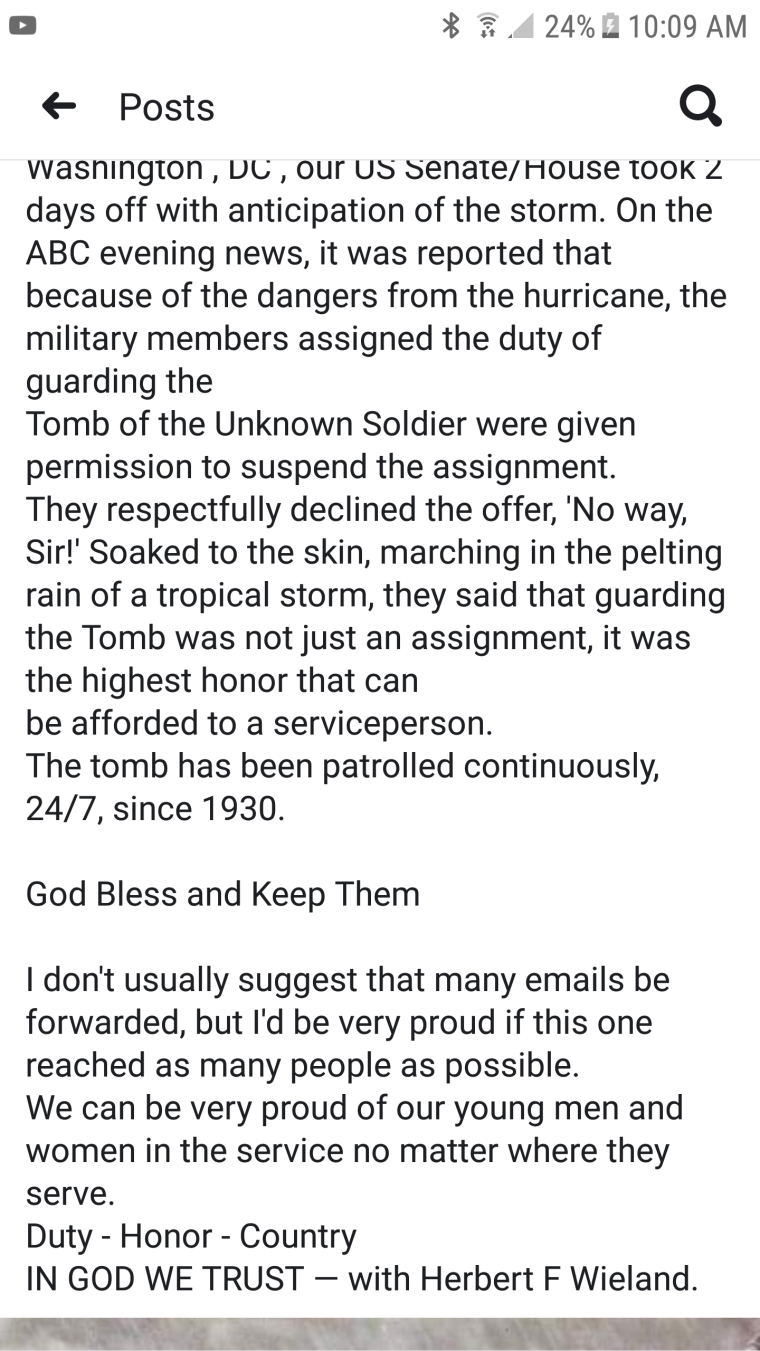