I just finished reading a book entitled The 37th Parallel: The Secret Truth Behind America’s UFO Highway by Ben Mezrich. It relays the true accounts of one man’s investigations into animal mutilations and how he noticed a connection between the mutilations and UFO sightings within America primarily falling along the 37th Parallel (latitude). Interestingly enough the book reveals that these unexplained incidents and sightings are usually followed by a clandestine military presence. I have blogged in the past about how I do not believe in extraterrestrials, as Hollywood likes to portray them, but I do believe in fallen angels. I also believe this alien deception will play a big role in the end time delusion and will likely be used as a way to explain the rapture. Articles like the one below are just a stepping stone to a much larger and more official “disclosure”.

Documents from a 2010 report from the now-defunct Advanced Aviation Threat Identification Program (AATIP), a program funded by the Pentagon, claim that Americans who encountered UFOs had suffered radiation burns, brain and nervous system damage.

Those documents, part of 1,500 pages released to The Sun, which originally filed a Freedom of Information Act request in 2017, stated, “Sufficient incidents/accidents have been accurately reported, and medical data acquired, as to support a hypothesis that some advanced systems are already deployed, and opaque to full US understandings.”

*Suggested post (in case you missed it): The Forth-Coming Disclosure

I have acquired for my personal library several books pertaining to the topics of aliens and other paranormal phenomena. This is hardly light reading 🙂 and not something everyone can stomach obviously. They are not all from a Christian perspective, so one must be grounded in the Word and abiding in the Vine lest one is led astray by the deception found within their pages. But doesn’t that seem true of any topic these days? The alien abduction phenomenon is tricky in that for some abductees it begins as a terrifying experience and remains so indefinitely, while others begin to “learn” from and perhaps even feel affection towards their captors. While some are used as lab rats only, others are told various tales about who the entities are, where they come from, and their pupose for the abductions.

One such tale is briefly addressed in the book by David Ruffino and Joseph Jordan entitled Unholy Communion. 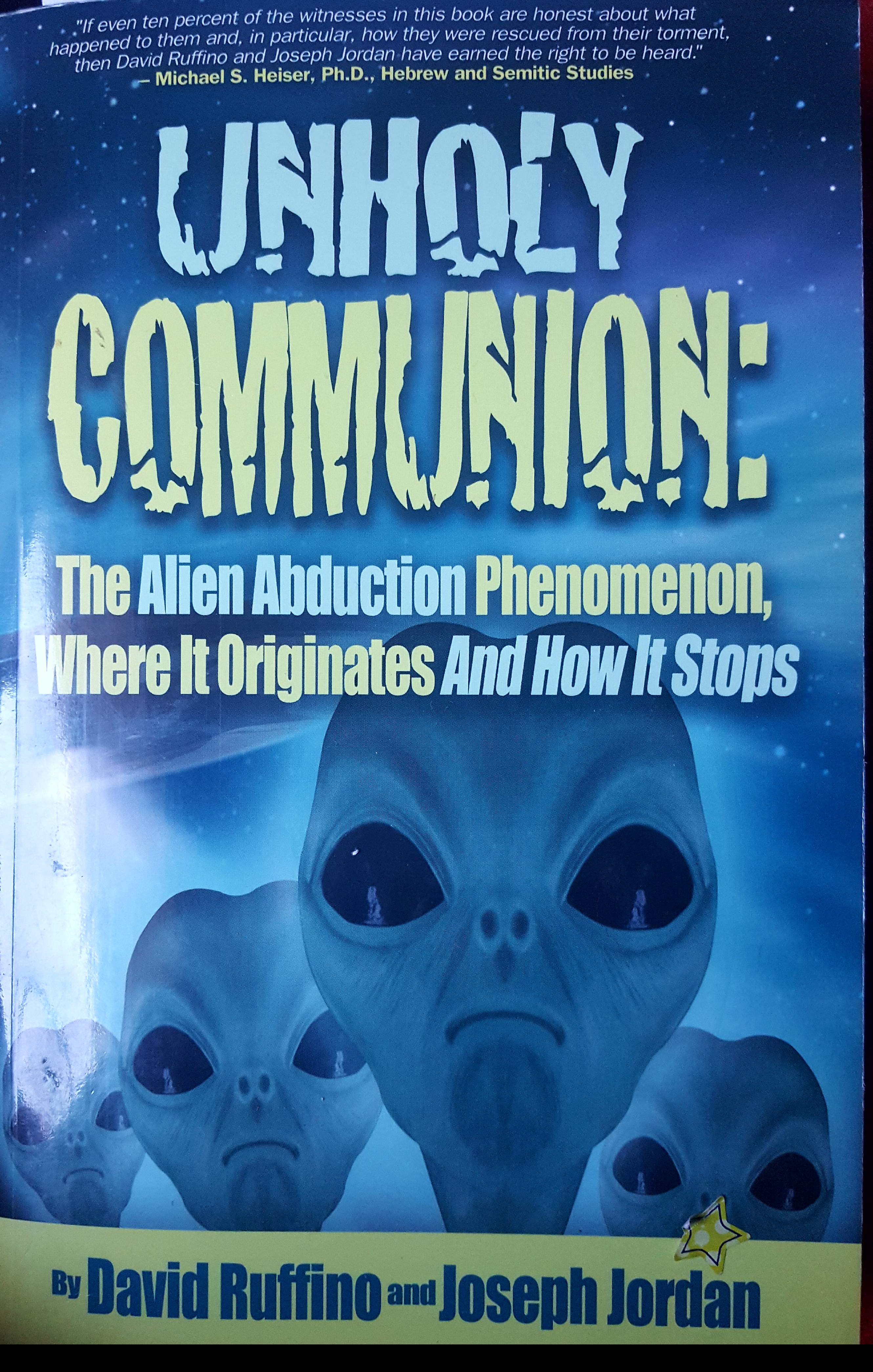 I am still reading this book, so I may very well have more to say about it later, but I want to share one passage with you that “raised my eyebrows”.

The authors are relaying, based on their own research and interviews with abductees, common details related to the abduction experience. Take a look at one particular detail:

19. Aliens make predictions of an imminent period of global chaos and destruction. They say that a certain number of humans…. will be “rescued” from the planet in order to continue the species, either on another planet or back on Earth after the destruction is over. Many abductees report they don’t believe their alien captors and foresee instead a much more sinister use of the rescued humans.

Personally, I cannot help but think of the rapture. It is very likely, if not probable, that the rapture of the bride of Christ will be explained away as an alien intervention so the bigoted and hateful Christians can be reformed in order to participate in the New World Order of peace and harmony and security. Furthermore, it appears these entities have an explanation for the terrible events that will consume the earth during the Tribulation as well.

(If you happen to read this AFTER these things begin to happen (disappearance of countless number of people, terrible natural disasters etc): WHATEVER THEY TELL YOU IS A LIE! THE BIBLE IS TRUE! DO NOT BELIEVE THEM; CALL UPON JESUS CHRIST OF THE BIBLE!)

I apologize if that last bit seems a bit nutty for me to add, but we really don’t have time to worry about feeling silly.

Note about the authors as printed on the back cover of the book:

David Ruffino has researched UFOs and abduction for over 45 years. He’s an alien abduction counselor, an ordained minister, and has presented his research in various media outlets. David, together with Jim Wilhelmsen are the founders of PAAPSI Org.

Joseph Jordan is a 16 year Field Investigator for the Mutual UFO Network and the president of CE4 Research Group.